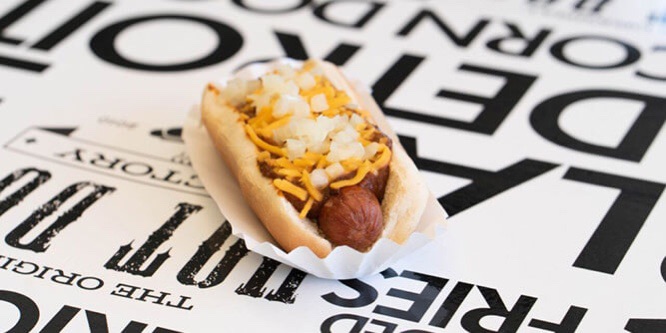 “I watched a video of someone who looks like me have a knee in his neck and die,” said founder Pinky Cole. “There’s no need for that.”

Read more: How to Support Black-Owned Restaurants in Your Community

In addition to supporting the protests on its website and social media, this week the restaurant opened a large bank account with Black-owned Citizen’s Trust Bank.

“We’re going to set an example by showing people that we can bank Black, we can buy Black, we can support Black, and this is how we make change in our communities,” Cole said.

Hundreds of protestors flooded the streets of Atlanta on Friday, May 29, four days after Floyd’s death. Though the demonstrations started out peacefully, they quickly escalated, with rocks thrown through windows, cars set on fire, and the city’s iconic CNN sign vandalized. Law enforcement used violent tactics on protestors, with five Atlanta officers now facing felony charges for use of excessive force.

Ebony Austin, the owner of Nouveau Bar & Grill, has donated $10,000 each to three Black-owned restaurants and a Black-owned boutique that were damaged during the protests.

“You think about all of these people that lost their jobs because there’s nowhere for them to go now, because communities have been destroyed and businesses have been destroyed,” Austin said. “If everyone puts something back into these companies and pays it forward, we can get as many of them running as we possibly can.”

Austin decided to invest in Black-owned businesses because she knows the challenges people face in running and starting them, including discrimination in getting loans.

Meanwhile, as demonstrations approach their eighth straight day, hundreds of Atlanta protestors have been arrested. Dennis McKinley, the Black entrepreneur and owner of the Original Hotdog Factory, has arranged a team of pro-bono lawyers to help provide bail and legal support to arrested protestors.

Eduardo Lowe’s coffee company, Koinonia, has pledged to donate 100 percent of its June profits to the Atlanta Solidarity Fund, which is also providing bail and legal support. He chose the organization based on recommendations from Black friends and community leaders.  Koinonia, which means “community” in Greek, has already donated $500 in advance, and plans to donate more this week.

Lowe, who is half-Latino and half-white, lives and works in a gentrifying Black neighborhood. Instead of opening a storefront, which he thought could exacerbate gentrification, he operates a pop-up stand that rotates through local businesses, many of which are Black-owned. For the time being he’s moved to online sales, and is now back to pre-pandemic sales levels.

JenChan’s, a Southern and Asian comfort food restaurant that only opened last fall, has struggled to return to pre-pandemic traffic and is running on a shoestring budget. That said, it shut down for two days to allow employees—a majority of whom are Black—to march in the protests or to take time to process. Employees were paid.

“I just feel incredibly passionate about this,” says Emily Chan, who co-owns the restaurant with her wife, Jen. “I’m not going to choose business over people’s lives. This is just way too important, and we’ve had way too many opportunities like this to do something as a country.”

Systemic racism and discrimination has benefited white people throughout history, and the onus has only been on Black Americans to fix it, Chan says.

“That is wrong,” she says. ”As a white business owner it’s really important that I do something.”